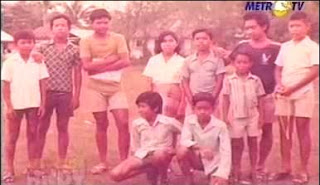 The real Laskar Pelangi. I wish to meet them and their teacher.
Once in a blue moon I get hooked on good movies. And I will watch these movies over and over but never get tired of them. Good movies in my book are movies that make you want to get off that sagging couch and start changing the world. From the Shrek movies to the Bucket List to the Freedom Writers and now it's Laskar Pelangi and Sang Pemimpi.
I have learnt that watching movies and listening to songs are not just mindless activities anymore. There are a great many things that one can gain and learn from those two activities provided that you look deeper than just the actors and actresses or the melodies of the songs, even if you are watching a flop or listening to a cheesy love song. There are lessons embedded in them.
It is not everyday that you can get a good quality movie in Malay that requires one to think and contemplate on the message that it tries to convey. So, imagine my surprise when Laskar Pelangi made it to our living room a few weeks ago.
An Indonesian student had told me about the movie and wanted me to watch it, but at that time I wasn't really paying attention. And early this year when it was shown on Astro I didn't make any effort to watch it either thinking that it would be just like any other Malay movies that receive so much hype but in truth it's just that, a lot of hype. I humbly admit my mistake.
The ten poor children from the richest district in Indonesia back in the 1970s reminded me for the third time in two weeks to always give other people a fair chance and that money is never a factor in making sure that knowledge and education reach the people.
The next step is for me to get both the books, Lasykar Pelangi and Sang Pemimpi.
Posted by Moon at 7:13 AM No comments:

According to the ever helpful Wikipedia, "Merriam-Webster Online defines common sense as beliefs or propositions that most people consider prudent and of sound judgment, without reliance on esoteric knowledge or study or research, but based upon what they see as knowledge held by people "in common". Thus "common sense" (in this view) equates to the knowledge and experience which most people already have, or which the person using the term believes that they do or should have." According to CitCat.com, common sense means 'akal' in Malay. Thus a person lacks in common sense is frowned upon as the person who 'tak ada akal'.
As we make our way to be better developed people, supposedly more advance in our thinking, attitude and overall conduct, this common sense that should be innate in us, seems to have lost its revered place. It may still be there somewhere in the convoluted brains of the modern man but seeing the many errors that these so called modern man commit, makes one wonder if it will resurface.
Taking up a a dedicated parking spot of a tenant, calling your lecturer at 10pm on the day she is on leave asking for your carry marks, or not giving signals for an ample time before changing lanes, are a few examples of where and when common sense and not to mention social grace have failed terribly. In these instances there were not due to lack of notifications or information, the unit address of the first example is clearly painted on the spot, the said lecturer had mentioned of her impending leave before, during and after she concluded the class and as with drivers in other countries, Malaysians are also required to go for driving classes and tests before they are allowed to drive. So what went wrong?
I might be guilty for simplifying things, but I think the problem lies in our attitude of having too much pride in ourselves aka being selfish. Our world revolve around ourselves that nobody can take precedence above us. This sickly attitude of the so called modern men and women can be the very source of the early demise of our caring society Well, one might argue that we are actually witnessing the destruction of the caring society vigorously promoted by the government.
Common sense breeds courtesy and courtesy is what makes a young man offers his seat on the LRT to a pregnant lady, a school boy offers to hold an old man's hand to help him to cross the road or a student offering to help carry his teacher's load. We all can do our part, in a small or big way, to bring back common sense into our folds. We just need to look beyond the confines of our egoistic selves and acknowledge that there are other people out there who deserve our attention.
Let's start today.
Posted by Moon at 3:46 AM No comments: